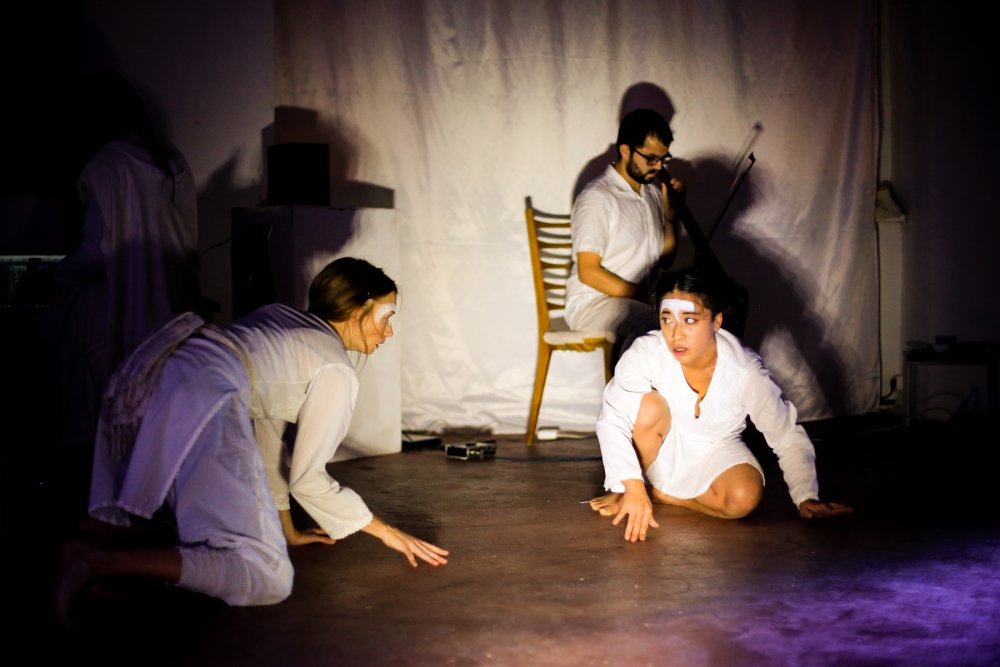 AKIN is a multi-disciplined composition relating to transience and belonging, overarching a connection from birth-to life-to death. By mediums of performance art, Butoh dance and live electro-acoustic soundscapes the piece reveals scenes interpreting boundaries, connection, rituals and interrelation between human beings; an intimate expansion between love and pain.

White creatures in pure and minimalistic images are giving a symbolic meaning to the immaterial and universal.

Performers continuously transform, led by characteristics of the primitive, animalistic, melancholic, delicate and sacral embodiment; moods shifting from one second to another.

We all play out these images every day, hidden and visible, all relatable.

About the performance collective

Every artist is coming from a different cultural background and has grown up in different countries – Germany, Indonesia, Japan, Sweden and USA. Three performers are based in Berlin and one in Stockholm.

They are connected by their passion to challenge the boundaries of confinement and their joy of collaborating interdisciplinary.

The fragile frame of improvisation gives the performers their own free self-expression, creating an urgency, a life nerve and something totally new by performing live. Integrating the audience, time and space by live electro-acoustic soundscapes and radical human transformations by Performance art and Butoh dance.

Akin might be a door opener to a new space and form for a new boundary crossing - a new belonging - coming home with being yourself and the beauty of crossing boundaries by art.

Riako Napitupulu, born in Wuppertal and grew up in Düsseldorf, is a german-indonesian-japanese painter, performance artist, art therapist and educator. She moves in diverse cultures and languages between different worlds. Her focus is on participatory art projects in public space. Her topics are about human and social issues as discrimination, intersectionality and belonging. She creates an intimate environment in her performance that transforms the space in a mutual relationship with the audience. Her movements are influenced by a creative intensity and expressive style in Butoh and improvisation dance.

Samaquias Lorta engage music with an academic approach influenced by his young start to a professional career as a teacher of cello, music composition, and dance. Through a nomadic lifestyle and interdisciplinary submersion in the arts Samaquias has developed a vision of challenging traditional and modern performance techniques by creating works that incorporate electronic acoustic instruments, sound design through field recordings. This translates directly to his goal of combining traditional music and electronic music during a performance setting.